The title of this essay is very important. For it conveys a message very few people in India (apart from “card-carrying” feminists) acknowledge – the need for men to be feminist in this country. It’s a natural assumption for us in India to assume that any word with the first three letters ‘fem’ is meant for a woman. But it’s important for our men to realize that it’s time for them to let the feminist within them rise, and let their ego take a backseat.

Lets discuss the fundamental problem with men in India. A couple of points guys don’t keep in mind are (I don’t mean this in an offensive manner, this is just to educate those who never looked in-depth into their nature):

A very significant point that was missed in the India’s Daughter documentary that came out more than 2 years ago was the entire point of why the rapist raped Nirbhaya. He didn’t rape her in his need for sex, he didn’t rape her because he had a ‘rapist’ mentality or was disturbed. He raped her because she raised her voice, and offended him. How could a woman speak to a man like that? An education doesn’t entitle a woman or give her a right to insult a man?! She has to be shown her true place!

The fundamental problem with the framework of Indian society is our natural assumption as men that women have to be subservient to men and have to be shown their place at the opportune moment. If not in her office, then outside. ‘Aukaat’ dikha do.

Why don’t we evaluate each other as humans for a change? If women are willing to understand that men can make mistakes, then can’t men accept that the woman in front of them is a fellow human who has to be evaluated on her merit and not on the fact that she has been physically endowed with breasts and a womb?

It’s not uncommon for women in middle-class households who have degrees from good colleges to leave their jobs once they have a child. A womb is a woman’s biggest enemy in a society that treats child-bearing as solely a woman’s responsibility. The man’s responsibility isn’t in that one beautiful moment when he holds his wife’s hand as she’s in labour pain. A man’s responsibility also begins the day a child is born, and just carrying his surname doesn’t mean that he’s fulfilled his duty.

Be it lower income households or middle-income households or rich households, the men in each section of society have a fundamental responsibility – to evaluate women as humans who also have aspirations, dreams and expectations. A man’s feminism is more important than a woman’s – primarily because one voice of a dissent from a man will be viewed with logic in this system entrenched in patriarchy. It’s funny that when a woman speaks out, she’s viewed as a troublemaker, but when a man speaks out, he’s speaking from logic. Then where’s your logic guys? 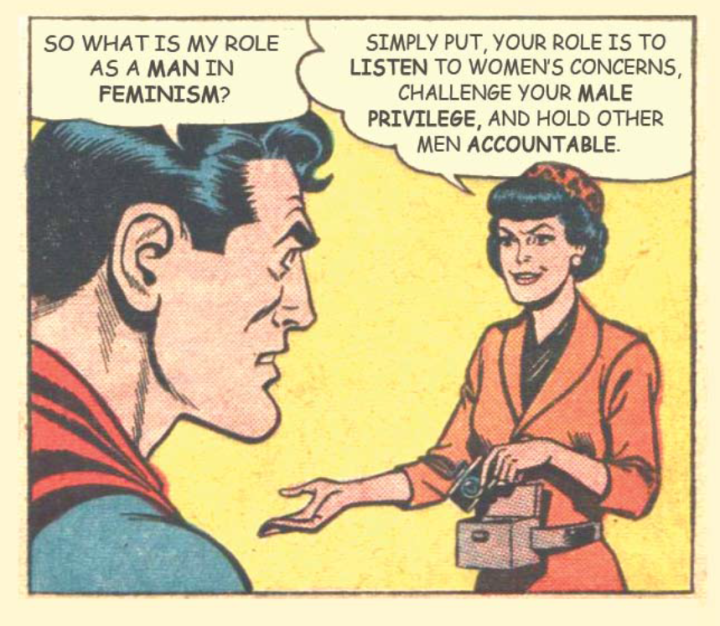 Are you eagerly anticipating that one day when she will take her maternal leave in office and then fall back in her career so that you can move ahead on not merit but social stupidity?

Why is it so natural for us to assume that a woman and her family is entitled to receive our bullshit, just because we were born with an organ that is worshipped?

My plea to the male feminists out there is – don’t “protect” your woman, she doesn’t need your muscle power to survive. Don’t “protect” her from bullshit your father is pulling on your wedding – she doesn’t want that. What she wants is respect, and your ability to ensure that. Your feminism lies in making others around you realize that logic is the way to move forward, not society or its customs that hold someone back because of their gender.

I understand my words sound harsh. Most men wouldn’t even want to be feminist on reading my essay. After all, who wants to fight for a cause that’s not even their own?

But retrospect – why do you “not” like women? Why do you feel that they should be subservient to you? Is it because of your social conditioning or because it’s logical to you?

Think guys, think. Because we need you too in this struggle to create change. If you don’t stand by us, and if both genders aren’t united in this fight, then we can never expect our society to move towards an egalitarian future. Neither can we dream of a ‘shining’ or ‘developed’ India. Because whenever one woman leaves her job in this country, we lose out on a portion of our GDP. Never realized this? For a change, think logically?

All you are going to lose out on is your ‘male privilege’. And trust me, that’s not a bad thing at all. You weren’t entitled to one, in the first place.

Wanderer, believer and everything in between. Can be found reading during her spare time and encouraging discussions on gender and sexuality.