Today is your 94th birthday. And I am happy that you aren’t here to celebrate it. I am happy you didn’t live long enough to see the start of the new administration, priding itself on its agenda of ‘economic prosperity for the nation’. Nowadays, when I open the newspaper each day, I wonder how your Common Man may have reacted to dalits being lynched and people being killed for having beef. Less than 8 months since you passed away, the India we wanted to create and envision has also died, in such a short span of time.

I have realised that we have gone back to having discussions which were debates post-independence. And I have also realised that dark days have arrived and had you been alive, maybe you too would have been sucked into this vortex of censorship. And this isn’t the Emergency where you can meet Ms. Gandhi on offending her. Here you will simply be uprooted and removed, without any warning or prior notice. 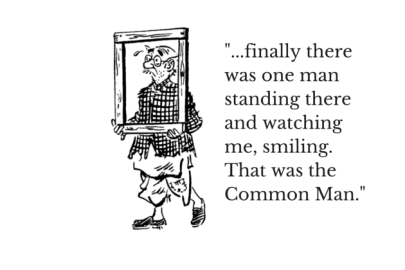 As a child I grew up reading your ‘Common Man’. I eagerly waited to grab the next Times of India just to read what you had to say about elections, censorship, films and politicians. If you belonged to this generation, I don’t think any newspaper would have been allowed to publish your ‘Common Man’ today. In fact, if you were alive, maybe the Common Man would have been the first thing to be taken off newspapers.

Today, one can’t speak, think or breathe. Thinking is a crime, questioning is a sin. Development is the agenda, but democracy isn’t. How would your Common Man survive this, Sir? The country is now in a State of Emergency, that too, without a Gandhi in power.

Your cartoons are a painful reminder to me of how we haven’t changed since Independence, in fact, now we have changed for the worse. If you were alive… I don’t want to imagine that possibility anymore. I really don’t. I am happy you aren’t alive today RK ji. I hope you rest in peace.

A loyal reader of the Common Man by RK Laxman.

Wanderer, believer and everything in between. Can be found reading during her spare time and encouraging discussions on gender and sexuality.